05 Jul Cai Wensheng: Welcome the wave of entrepreneurship and investment in China

in 隆领观点 by admin Posted at 20: 25h in Long Ling View by admin

This article is based on the recording of Cai Wensheng's speech, and the full text is as follows:

Why are Chinese Internet entrepreneurs so successful?

1.1 The scale of users on the mainland has enabled China's Internet entrepreneurship. Entrepreneurship is the strongest voice in this society, and entrepreneurship is rock and roll in this era. In the world, there are actually only two and a half markets for the Internet, one in the US, one in China, and half in India. Only China and the United States, if you capture these two markets, you can succeed, and you can also extend to other countries. Not only Hong Kong and Taiwan are difficult to succeed on the Internet. Even if there are 100 million people in Japan and Germany, their high technology is the best in the world, and they can't make very large Internet companies. The key point is back to the user scale.

1.2 The winners of the Internet must rank at least in the top three areas. We must understand why they say that Didi and Meituan spend so much money, but VC still gives them money because their users reach a certain scale. I also don't think everyone can be a Meituan or Didi, but you can do it in every vertical field. His scale may not reach hundreds of millions, but it must be at least in the top Third, the Internet is basically an era of winner-take-all.

2.The most active capital environment

2.2 Be creative and execute, VC will always give you money. We originally made money in the traditional industries. Those funds for clothing, shoes and hats, minerals, and real estate will also emerge as Internet capital because they cannot find a way out. So this capital can be said like this, as long as you are really creative and have the ability to execute, you don't need to worry about getting no money. The hardest part of these VCs is that they can't find good projects and can't spend their money.

3. The most hardworking entrepreneurs

Whether it is in the United States, Europe, Asia, or Southeast Asian countries, everyone's effort is really far less than that of Chinese entrepreneurs. Our Chinese entrepreneurs do not work for eight hours a day, but almost 16 hours, even if it is When drinking tea, or drinking, everyone discusses or something related to entrepreneurship. This effort, along with this process, will also generate a lot of wasteful opportunities, but our creative ability is very helpful for entrepreneurship. 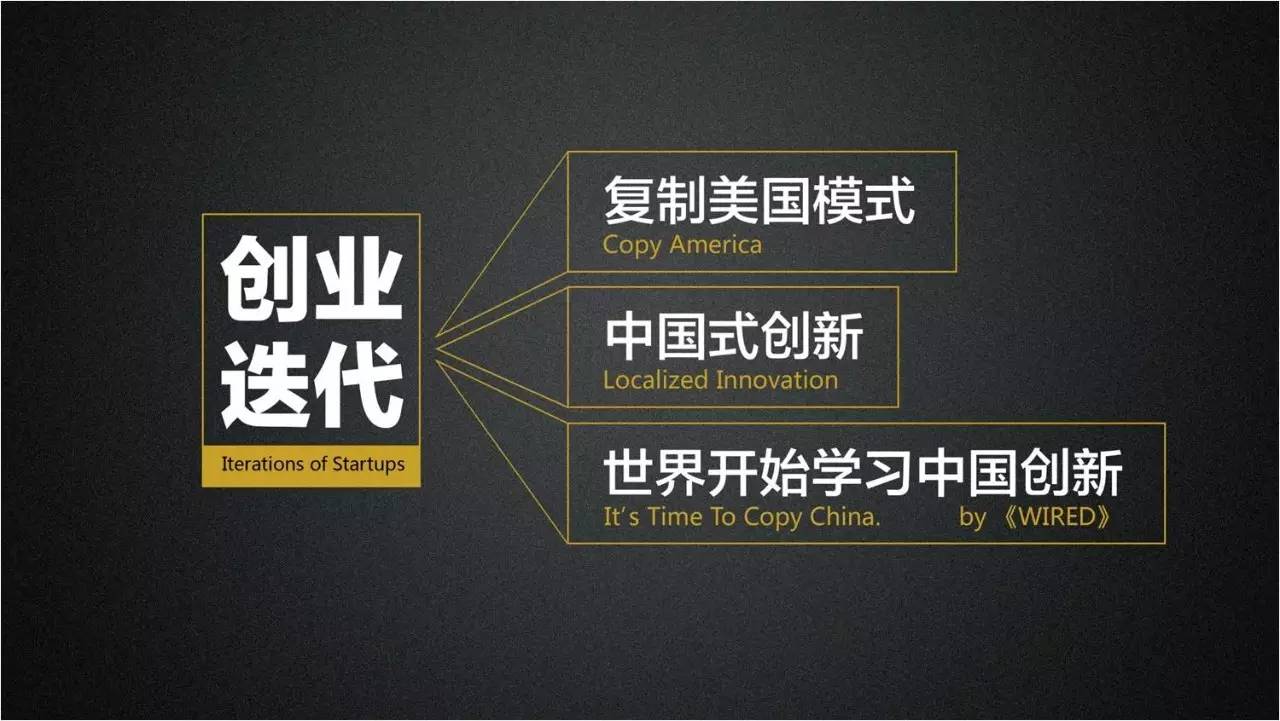 Joining Chinese innovation can go a long way in China. We know that ICQ disappeared a decade ago or even earlier, but QQ still exists in China today, and it is still very strong. This is actually China's own innovation, because the most complicated ICQ is just a communication tool, but in addition to the communication tool, our QQ has built a Q group on it, and added the QQ space on it, which has become different. It even became a series of contents including QQ news, QQ video, and download. This is where China started to innovate. Almost all the Western countries that can succeed in China need to add China's own innovation. 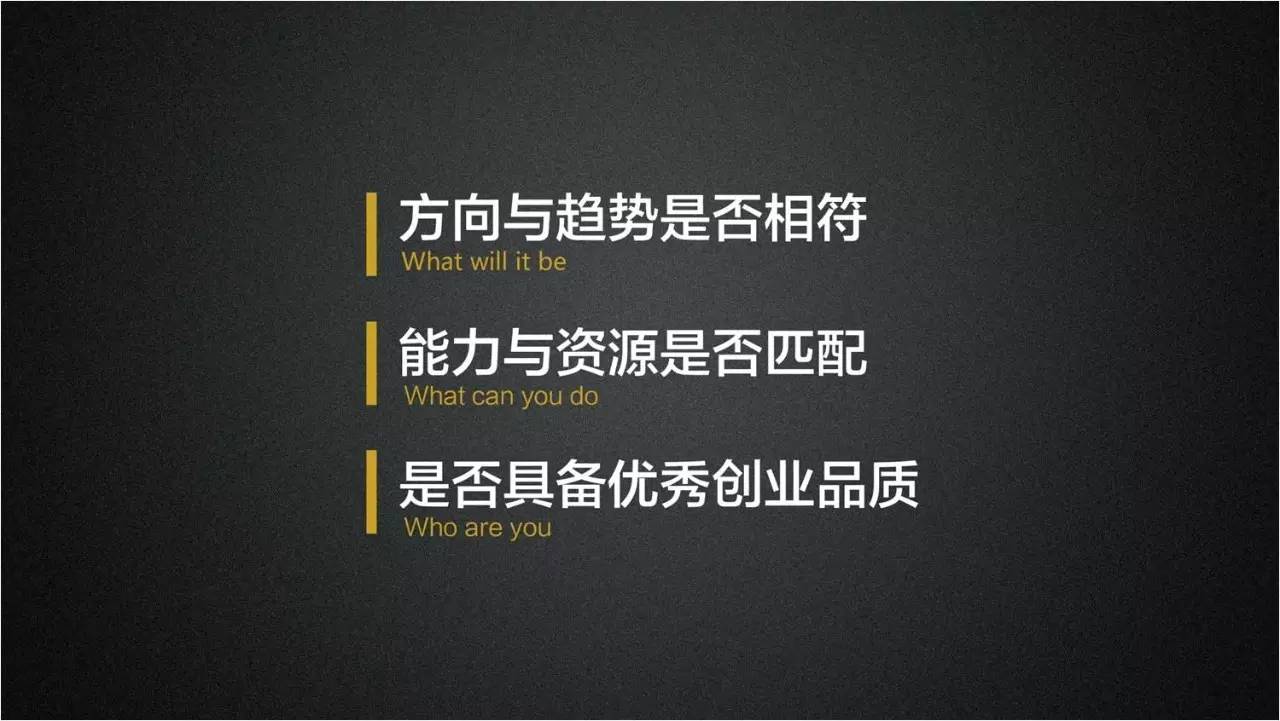 What aspects do investors invest in and entrepreneurs see?

1. Whether the direction and trend are consistent . For example, in China, you are still doing something related to PV, then there is basically no way out. But all enter the mobile Internet, and both use mobile phones and mobile terminals, you will be difficult to succeed in making a PC. Of course, if you tell me that there is no problem in starting a business in Africa now, or there is such an environment in that place.

3. Whether it has excellent entrepreneurial qualities

3.1 Very good learning ability. The Internet is really a thousand miles away. It doesn't matter what subjects you read in the front. What matters is whether the ability to learn, integrate, and think is strong enough in the future.

3.2 Managing organizational capabilities. It is getting harder and harder to rely on one person to succeed. To become a better company, a great company, you must have the organizational ability, you must be able to attract different talents.

3.3 Have the ability to flicker investment. If you don't have the financing ability, it will be difficult to grow quickly. So how to integrate the capital market becomes even more important. 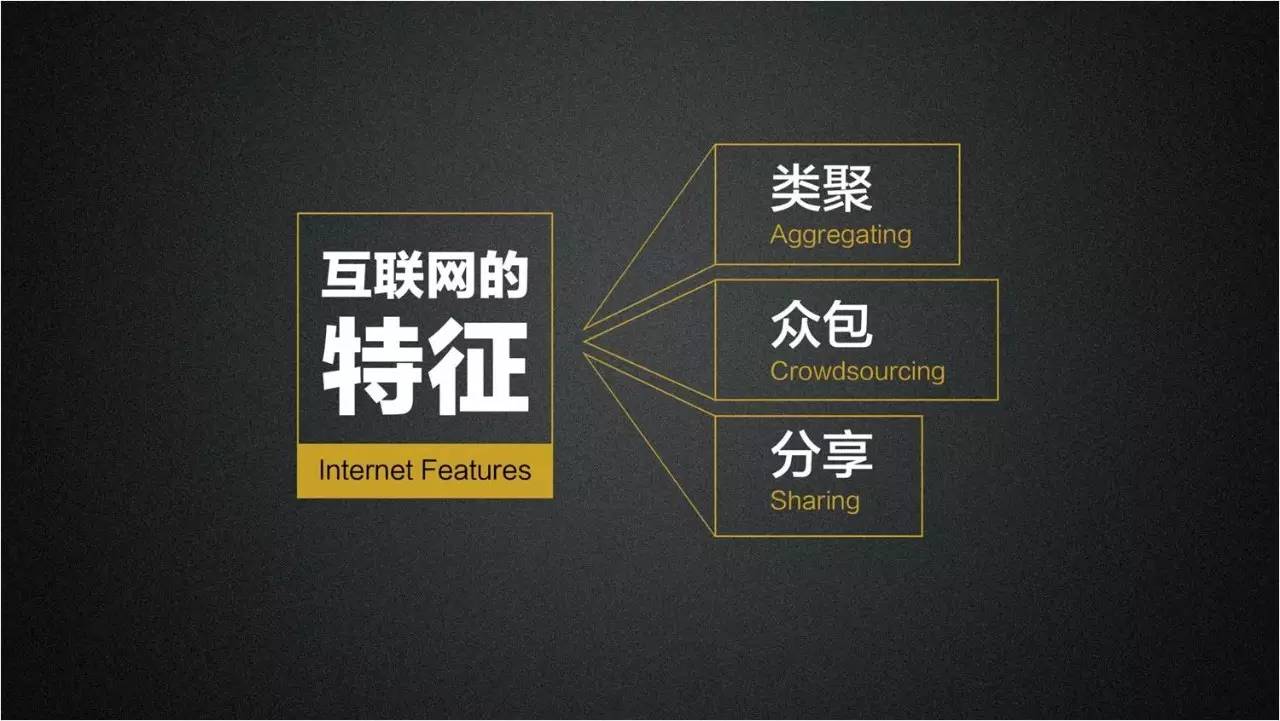 1. Agglomeration effect. What is class gathering? The bigger is the bigger, the stronger is the stronger, and the things are gathered together. If you want to find a way, you must have a stage where the winner takes all. In the Internet era, there are the same views and the same hobbies, which can be quickly accumulated through one point. Because the Internet is now well-developed with information, it becomes a winner-take-all, and the stronger the stronger, it returns to the issue of scale.

3. Share. Social networks have brought us a very big change. If you can share and social networks in the process of starting a business, it will become easier to start a business. 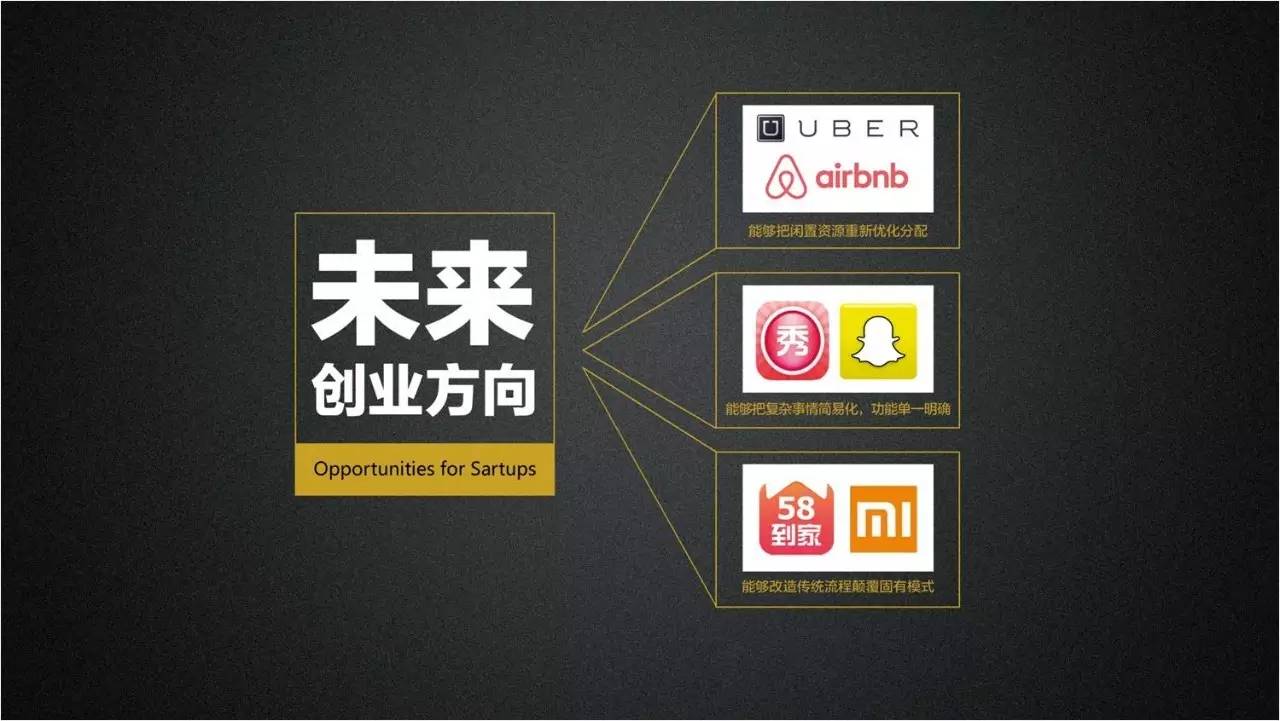 1. Re-optimize idle resources. Such as UBER, airbnb, the demand in the field is relatively large, relatively standardized services. Such as yachting, conference sharing, education classroom sharing, there will be a great opportunity for such things in the future.

2. Simplify complicated things, and single and clear functions. Like Meitu Xiuxiu, one-click P-picture saves tedious and complicated steps. The entire Internet, including traditional industries, can be described in simple terms.